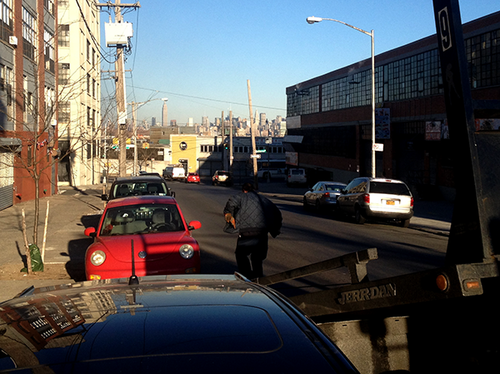 The first ticket I got was from parking. Pretty plain and simple. I didn’t know what I was doing. Or the lay of the land.

I live in Bushwick, Brooklyn. I transplanted here from Oklahoma, and if you must know, Bushwick is an area that would not be classified as the safest. I live here for two reasons primarily, one: it’s cheap. And two: it’s extremely close to the train I need to get into the city.

It all started back in late august. I was feeling okay about the car and I had had a few drinks with a friend of mine in Williamsburg. I took the car and gave us a ride back. By that point I felt like I had developed the basic mapping knowledge of my hood. I knew east from west, I think. I parked in a school zone knowing that it probably was not okay. I asked my buddy, who is a school teacher, and he was like “Yeah, that’s fine.” - And we went to the next bar.

I woke up knowing I had a ticket the next day. I had parked the car on a school day in the school parking zone. I figured I could get there early enough and move it and then not have to worry about a ticket. As I walked up I sighted the first of many big orange tickets between my wiper blade and my windshield. From a block away, actually. It cost me a silly $90. Then I got a ticket the next week, and again the next week. Before I knew it I was $200 something in the hole to parking tickets. Right… welcome to New York.

I decided “I’m not gonna put up with this shit.” I didn’t give up on the notion of having a vehicle in NYC. I’d built disastrous habits of side to side parking: the breakfast, lunch and dinner of owing a car in Brooklyn. So. I set reminders on my phone, computer, cloud… I journaled, in detail, the parking spots in close vicinity. learned a specific protocol and lived by it. Pretty well. Almost flawlessly. Until all hell broke loose.

The first incident - I left the lights on, plain and simple. And I met the neighbors.

It was right around the corner from my apartment. When we had parked that night it was kind of a tough fit and there were a group of guys lounging on the stoop in front of my bumpy parking job. They were eying me as I got out and I was a little cocky towards them because I’d had a beer or two. While parking I had lightly bumped one of their cars and they came up to look at the front bumper. I asked one of the guys about it and he just shook his head at me. I was actually really nervous. And therefore - left my lights on.

The next day I came out to use the car and it wouldn’t start. Not even a beep when I hit unlock on the key. I didn’t know what to do. I wouldn’t say that I panicked… but, really, I did.

I called a tow truck. While I was waiting for the tow, the lady from the apartment upstairs starts telling me about how she saw my lights on last night but didn’t know who to tell. She had asked all around but no one knew. She could tell I wasn’t from around, it’s the Oklahoma plates that gave that away, I’m assuming.

The tow truck eventually showed up and the lady decides to inform me that she’d have given me a jump with her car and/or I could have called a taxi for a jump. I the ended up costing about $45 and a taxi would have cost $10, and my neighbor = nothing! The tow driver it didn’t believe it was a diesel, though I told him many times. He reluctantly kept trying to use a small battery pack jumper and telling me that the pack was “super charged”. I told him that I was pretty sure it didn’t matter because the diesel needed a bigger spark or something (like I know shit about diesel cars). He fought me on it until we both eventually gave up. I am sure he thought I had wasted away his evening. And and luck for both of us - I was about to waste more of it!

I asked him again to give it a shot from his truck. This time he went for it and even that didn’t work. An hour and a half had probably gone by at this point. Then he noticed it was a standard transmission and asked me if we could push it and then throw it into gear. It was worth a shot.

My neighbor and I helped him push the car in front of his truck. He put the battery pack jumper on the battery and pushed me up the hill with his front bumper. This was a moment of pride for him now. He’d spent an hour with a little red german car and a white guy from Oklahoma. He was determined to get this motherfucker started.

I let go of the emergency brake, and let it roll backwards down the hill. Throwing it in to gear and it jumped a foot and started right up, almost plowing into his tow truck. The tow driver jumped out and ripped the battery pack off my car as if in victory celebration. He then quickly had me a sign the dotted line and disappeared.

I’ll bet you he never helps anyone with Oklahoma plates again. I learned a thing or two: One being, maintaining a car in NYC was going to need finessing. It’s easy to remember to move it. It’s hard to deal with when it brakes. Two, don’t be afraid to ask your neighbors for help.