Yep, this isn’t it either, but I am getting closer. I’ve come to find that my process works better when I start building stuff, even if the fidelity is too high.

Although I am still pretty unclear about what I am building for my final thesis product I need to defeat two barriers right now: 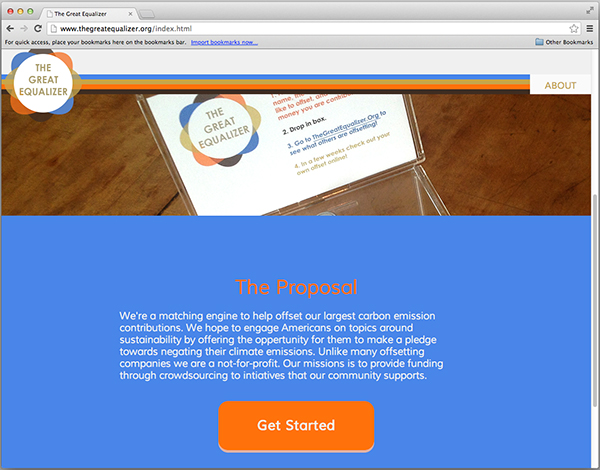 ####The Great Equalizer is a not-for-profit concept where the site acts a matching engine for people offsetting what they predict as their most guilty pleasurable/carbon emission contributing behavior.

The original prototype involved a ballot box and envelopes where people would write who they were and what they offsetting on the envelopes and then leave them in the box, those would then be turned into digital content on the site. From there, online users could go and match that pledge.

This doesn’t work as people are not engaged by the ballot boxes like we used to be, but what if we thought of it as an online ballot box. That’s exactly where I am taking this…

The concept of an online ballot box is nothing new, nor is the concept of crowdfunding, but hold with me a second. The goal of this prototype is two fold. 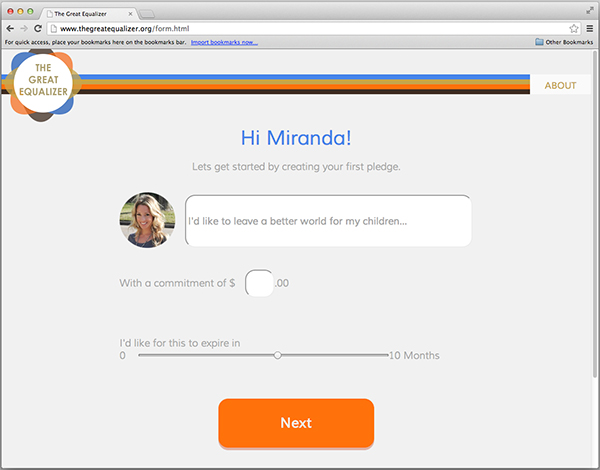 The form above is a rough draft of what the call to action may look like for the user. In this iteration the user signed in via Facebook or Twitter and is presented with this form. The form ask for a pledge, a commitment (in cash), and an expiration for when their pledge ends. 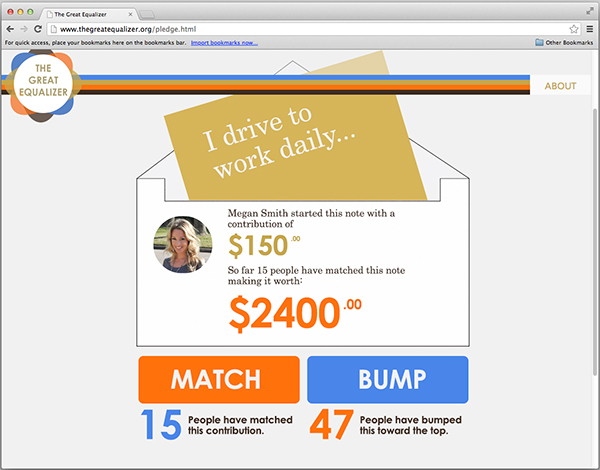 Once the pledge is created it’s added to an archive of existing pledges where public users can browse. If someone is interested in your pledge they have two interactions. The first is basically just like a like on Facebook or a heart on Tumblr. I call it a bump, cause its role is to bump the most interesting pledges to the top. At the top, others will see them sooner and match them more frequently. It’s the non-committal interaction. The other interaction is to match the pledge. A match is like joining a conversation with the creator of the pledge, but in order to join this conversation the user who’s matching has to contribute to the pledge financially. Once the user has joined that pledge it is now also their pledge. While the pledge is in circulation (before it expires) those users who have matched a pledge can comment on the pledges conversation thread. The idea here is that the conversation will lead to the deeper tissue of the issue at hand. Whereas the group might come to some creative resolve to the behavior at hand.

The matching groups involvement is instrumental overall to because when the pledge has expired, the creator will be asked what kind of institution they would like to have the pledge money contributed too. Whether it be a Green Bank, and Not-For-Profit, a University, or even a clean tech startup. The group will have a vote as to where the money goes. 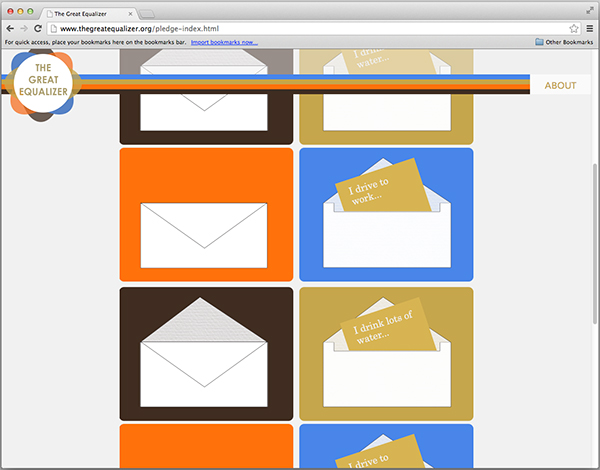 The core of this concept is that the pledges could possibly grow to be large sums of money and those funds could be used on the back end to convince larger corporations to possibly match a groups donation. The corporations match would be a donation to a not-for-profit and they could use the cause they supported publicly, possibly even have access to the pledge backers themselves for feedback.

In conclusion, the idea meets my goals loosely for now and I am happy with that. I am thinking about how this could have a more proactive approach to changing the users behavior that they are attempting to offset. Also, the use of the word “offset” is bothering me as it gets me back into thinking about my climate guilt argument I outlined here earlier this semester. The other way I have thought of this is to include some user metrics from Facebook and other social services through maps and graphing abilities. Then instead of the user being given a “blank slate”, the pledge could be influence by their own social data. An example would be, when you login you see that you’ve flown 1,400 miles according to your social media and you could use that as your first pledge. The idea of starting off from data gathered through social networks is still new and need somes thinking through. For the time being, this is my thesis project and I am excited about showing it to the world and getting some real world feedback.

Check out the prototype online at TheGreatEqualizer.com. (temporarily offline)